Thinking about living in Washington, DC? Don’t. Not until you read what I have to say.

I’ve been living in the district for more than two years and I feel very qualified to explain what it’s like to live here and what you should expect if you relocate to Chocolate City.

But before I get into the pros and cons about living in DC, you have to promise me one thing: that you will get the film and TV romanticised version of Washington, DC out of your head. This ain’t Scandal.

Washington, DC truly is a beautiful city. I didn’t see it at first when I started visiting as an adult. That’s probably because I’d always looked to big cities with skyscrapers and gargoyles as the ideal. But, DC has some of the most breathtakingly beautiful sites around.

You can sense hundreds of years of history with every turn of the corner thanks to its numerous government buildings, and statues. It doesn’t hurt that the Washington Monument stands out proudly as the city’s version of the Statue of Liberty.

Springtime also brings out the cherry blossoms, which you can see in many places in the downtown area and don’t even get me started on the Tidal Basin. It’s simply iconic.

DC may have dirty politics, but it’s a very clean city.

I have visited many cities across the United States, and I can tell you DC is one of the cleanest cities I have ever visited and lived in.

It’s not uncommon to see street sweepers working on most major streets and residential areas.

I visited New York City for my birthday last August and after seeing all the garbage, I couldn’t wait to return to DC. Even the air smells purified here.

Unlike in New York, there’s no garbage in the alleys, smelly garbage juice or rodents running hither, thither and yon.

This is not to say that DC doesn’t have its grungy spots. It does. But, for the most part, the city is pretty darn clean.

I like to refer to DC as Little United Nations. Every country is represented here. I work with people from Morocco, Bangladesh, Somalia, Ethiopia, Senegal and Iran, to name a few. Everyone is here.

I thought I would be out of place in the city, considering I’m from the Caribbean, but sometimes I wonder if there are any Americans here because I see every other nationality.

I don’t enjoy homogenous environments, so DC is right up my alley. As a result, I’m exposed to different languages, cultures, religions and food. You’d love the city for its diverse population.

The Food Choices Are Incredible

Asian and Mediterranean and Caribbean, oh my! You will love the many restaurants in the city.

This goes hand in hand with the city’s diversity. There are just so many incredible hot spots, food trucks and holes in the wall to try that you will never get hungry or bored.

The Bad News About Living In DC

You wanna live here? You’re going to need one of the these three things:

According to a 2020 report by Fox 5 DC, the district is the fourth most expensive city to live in, in the US.

From housing to gas prices to school fees (if you have kids in private school), this city will take a toll on your wallet.

It’s really hard to make and keep friends here because most people seem to pass through DC on their way to another destination. What I mean is, some people come here for a career opportunity and when another, better opportunity presents itself, they leave for another city.

A lot of university students also complete their studies and return home or go to some new spot that offers them the money and life they want.

Traffic Is A Nightmare

The traffic is only worsened by the fact that more people are physically returning to their jobs and college students are heading back into the classrooms. It’s not uncommon to see bumper-to-bumper traffic starting from 3pm.

The worst part is that there always seems to be construction or an accident, which slows everything down. People in this city are nosy, so even if there’s a minor accident, you’ll find them hitting the brakes to see what’s going down. No one ever hops out of their car to help, they just wanna see roadkill.

There’s no way to sugarcoat this, DC has a lot of crime.

Not a day goes by that I don’t watch the news and see reports of some prominent doctor being killed during a carjacking or a toddler shot in an inner-city. It’s bad.

I’m always baffled to read reports of people saying it’s super easy to find a job in DC. I’m like, these people must clearly have the hook-up because that has not been my reality or other people’s reality.

It’s hard as hell to find a great-paying job in DC for various reasons:

My advice to anyone thinking of moving here is, apply for jobs while you’re in your current hometown and don’t move here without at least $10,000 saved up. I’m not joking, and that is the bare minimum.

A lot of the residents here are quite pretentious. They name drop a lot, discuss their wealth or talk about where they live. They look down on you if you weren’t educated at a certain university or live in a certain area. That’s not all Washingtonians, but it’s definitely enough where it would annoy you.

There Are A Lot Of Homeless People In DC

According to the United States Interagency Council on Homelessness, as of January 2020, DC had an estimated 6,380 people experiencing homelessness on any given day.

Of that figure, 1,452 people were individuals who experienced chronic homelessness.

It’s a sad state of affairs considering that Washington, DC is the nation’s capital. It literally is the seat of power. It’s not uncommon to see tents erected near buildings. There are whole communities in certain downtown areas. It in no way compares to what you’d see in Los Angeles or New York, but it’s still pretty awful.

I vlogged about this on my YouTube channel a year ago. Click here to watch that video.

I hope you enjoyed learning the good, the bad and the ugly parts about living in Washington, DC.

It truly is a wonderful city and I am so happy to call this place home.

If you have comments, questions or concerns, please feel free to drop them down below in the comments section.

Tour My Colourful Washington, DC Apartment And Prepare To Fall In Love 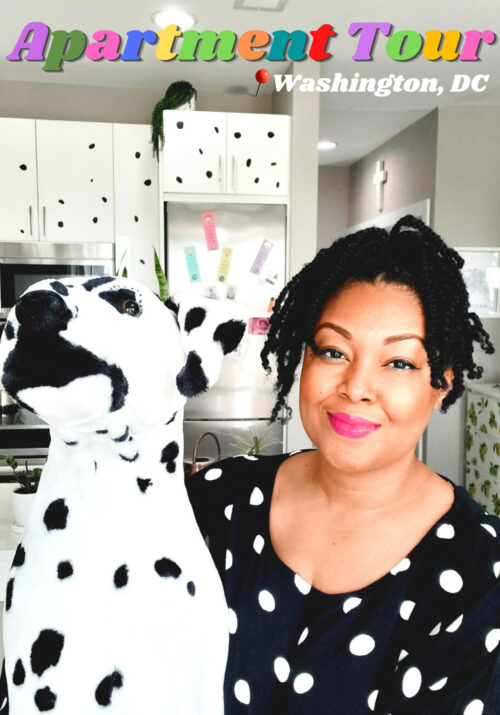