She’s controversial, says it like she means it and is so damned fun to watch. So much so, that I flew 800 miles to get a front row view of the one and only Wendy Williams.

I’ve been following Wendy’s career since she was on radio stirring up trouble. I’ve always appreciated her down to Earth Jersey humor and her boldness in asking questions the public wanted answered.

So, in late 2016 I decided to take Wendy up on her daily invitation to join her studio audience. But, first, I needed company, as Wendy is not to be experienced alone. I called up my faithful travel buddy, Ebonique and asked her if she wanted to tag along. She had never been to New York and had always wanted to experience the Big Apple, so it was an easy sell. There was one caveat – we had to get tickets.

I scoured Wendy’s website for dates and landed on an opening for January 9. I thought it would be a great way to ring in 2017, so I went ahead and applied. After answering a couple of questions and uploading a headshot of yours truly, I hit the submit button. Then, the wait began. Every day I would check my email, hoping that Wendy herself would extend a personal invitation. Hey, a girl can dream.

Then, on Friday, December 9th I got the email I had been waiting on.

“Congratulations, your request for reservations to see THE WENDY WILLIAMS show has been granted.” The email, which came from the Audience Department, advised us to arrive at the studio no later than 8:00 a.m., explained the rules and encouraged us to dress in bright colors.

I immediately confirmed. Minutes later, I phoned Ebonique with the good news. We could hardly contain our excitement. I immediately bought our airline tickets. We were on our way.

The journey to New York was not without incident. While thousands of feet above ground, our Delta pilot announced that La Guardia’s airport was closed due to a snowstorm on the ground. I didn’t even know airports closed while planes were still in the air. That caused a bit of concern among the passengers. After 20 minutes of circling in the air, we began our initial descent into La Guardia. From up above things looked fine. But, as we began descending, I thought, ‘this is it!’ I had a window seat, so when I peeked outside it looked like an absolute Apocalypse.

The pilot landed the plane like a pro. That was the smoothest landing considering the horrible conditions. Once on the ground, we braved 18-degree weather and took a cab to our hotel.

The morning of the show, Ebby and I decided to leave early so we could be first in line. We stepped outside of our Times Square hotel, hailed a taxi and headed to the studio. We’re two island gyals, so we weren’t ready for the frigid temperatures that greeted us at 6:00 a.m.

Minutes later, we pulled up the studio, thinking we would be first in line. Turns out, two other girls beat us to it. We quickly joined the line and stood there until security opened up at 8am.

Once inside, we were treated to coffee and tried our best to warm up. The Wendy Williams show is a well-oiled machine with various segment producers buzzing about the place. I noticed one producer in particular pacing past Ebonique and me repeatedly. Finally, she stopped to ask us if we had a question for Wendy. We said no. She then asked us where we were from. Let’s just say The Bahamas still impresses a lot of folks. She then asked if I would be interested in playing a game with Wendy. Hell yeah! But, she had asked several other people as well. So, I wasn’t a shoe in. After snapping a photo of me to send to other producers, she gathered me and two potential participants and asked us to recite Wendy’s famous catchphrase, ‘How you doin’?’ I’m great with impressions, so I nailed it. Ten minutes later, she returned to say the producers had chosen me. I couldn’t wait to meet Wendy.

I was told how to introduce myself when playing the game with Wendy and they asked me repeatedly to say the catchphrase. They wanted to make sure I said it with the same level of enthusiasm every time.

Something people should know is that the show is very produced. The audience is coaxed into reacting strongly to certain stories. Every clap and scream is encouraged.

The producers placed Ebby and me front and center in the audience. That was the greatest TV real estate ever. If you watch that episode, you’ll see me in a black turtleneck shirt with a faux fur vest over it. The outfit made me pop on screen.

Minutes later, the intro music starting playing, increasing in volume the closer we got to hearing, “Now, here’s Wendy.” The door opens and Wendy appears.

The audience genuinely went wild. This was the Golden Globes post mortem show, so I was ready for it.

I always wanted to know what Wendy looked like up close. She didn’t disappoint. She has great skin, a beautiful smile and is very thin. While on break she turned to me and said, ‘Did you really fly all the way here to be with me?” I said, ‘Yes. We flew all the way to New York for you, Wendy.” She seemed so humbled by it.

We played the game and I won a gift certificate to Whiskey in New York.

As a former news anchor, I appreciated the opportunity to see how the show operates behind the scenes and see Wendy in action. I remember her being very reserved, very professional during breaks and she used a lot of hand sanitizer – smart considering how many hands she shook during the show.

My friend and I had an amazing time and we would both do it again.

How am I doin’? Much better after meeting my friend in my head, Wendy Williams. 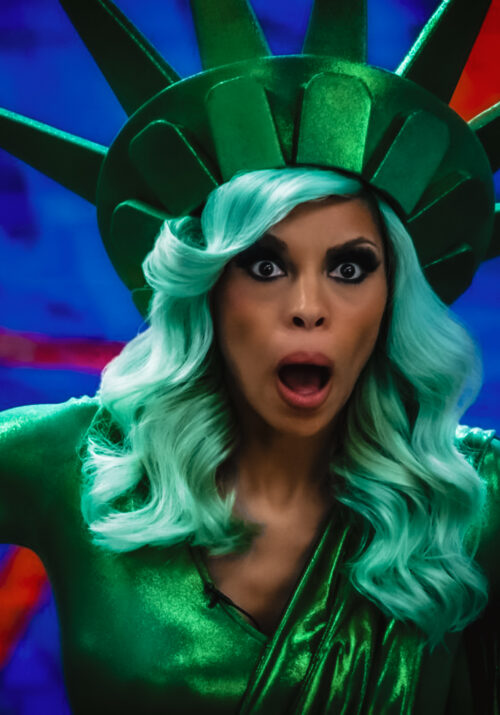 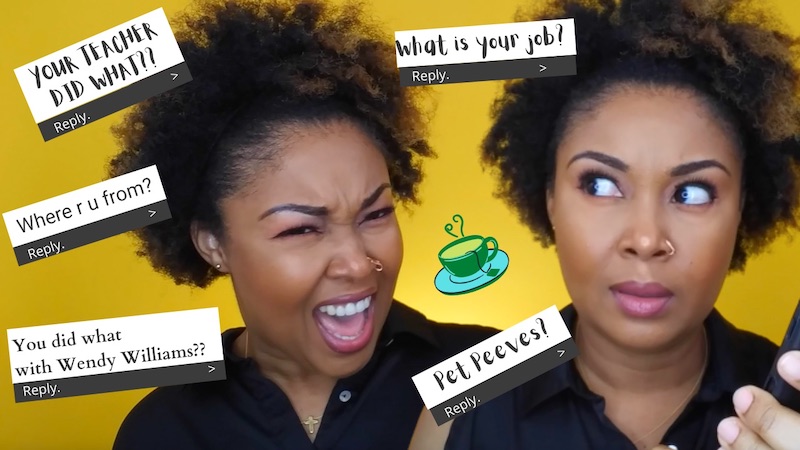