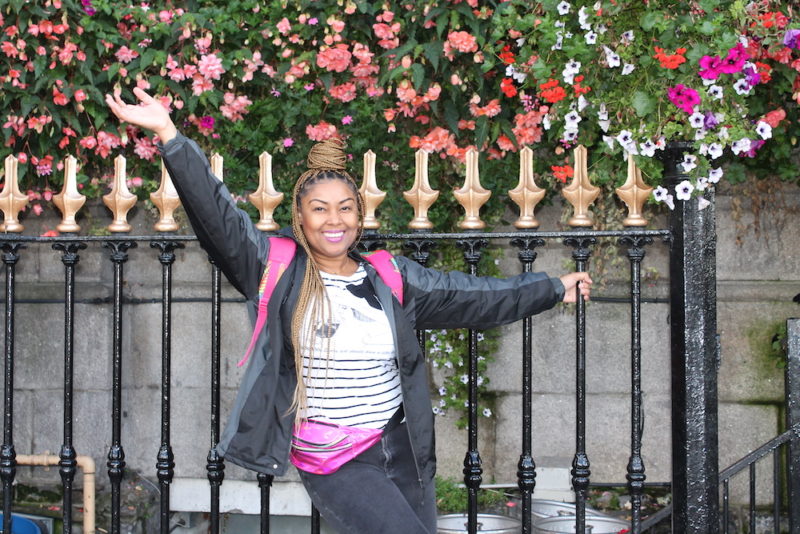 My First Trip To Dublin, Ireland

After nine days, thousands of travel miles, a five-hour time difference and lots of lost sleep, I’m finally back from my amazing trip to Ireland. As I mentioned in a previous post, Ireland had always been on my bucket list and I feel so fortunate that I was able to finally make it to the Emerald Isle.

Nothing and no one could have prepared me for this island’s amazing beauty. It was truly breathtaking. As I sat on the plane and we were getting close to landing, I looked out the window and saw the most lush green ground I have ever seen. As a Virgo (an Earth sign), I have a real appreciation and respect for nature.

I knew that we were in the right place. The immigration process was smooth. The immigration officer was shocked that we flew all the way from The Bahamas to come to Ireland. We later went outside to get a taxi to our hotel. I saw more taxi cabs than I have ever seen in my life. I later learned that Dublin has more cabs than New York City.

As we drove through the city, I realized that Dublin really is a wonderful cosmopolitan. I really would enjoy living here. You can find all types of people here. It’s a vibrant city filled with young college people and immigrants from all over the world. That added to the excitement.

One of the things I quickly noticed is that they have a lot of pubs. I mean, a lot! Socializing seems to be a way of life for the Irish and they take that seriously.

When researching hotels, one of the things I looked for was a hotel that was off the beaten path, but not too far from the action. I did not want to stay in the Temple Bar area, which has lots of pubs and noisy revelers. So, we stayed at an eco-friendly hotel on Charlemont Street.

Our itinerary was set from we left Nassau and we improvised along the way.

One of the first things we decided to do was just chill for the first day and sleep considering that we were now dealing with a time difference. We decided to go exploring and get into our activities the next day.

On Day One, we went to the Guinness Storehouse. I know, I know, it’s what every tourist who visits Dublin does, but we just had to. You can’t go all the way to Ireland and not go there.

We got a late start and walked in the rain and cold to get there, but it was cool. I have to say, I appreciated the setup; it’s a huge storehouse, but I wasn’t blown away. In fact, I had more fun shopping in the Guinness store and visiting its Gravity Bar.

It’s not a guide-led tour. So, you basically wander around and visit the different floors on your own, which is cool. But, again, it didn’t blow me away. We did get vouchers for a pint of Guinness. I am not a drinker per se, and I don’t like the taste of Guinness at all. But, I have to admit, it was very smooth and creamy. Like, really creamy.

Some of the customers learned the proper way to pour a Guinness, which I thought was pretty cool. Would I do this tour again? Not sure. But, who knows.

After we left the storehouse, we caught a taxi and headed to get a quick lunch in the College Green area. So, we stopped at a pub and had a beef and Guinness pie. It was ok. I am extremely picky when it comes to food. I love to try new things, especially if I’m in a new part of the world, but this was just ok. I am not big on beef and the Irish seem to love meat and potatoes. The pub’s atmosphere was awesome and it felt good to sit next to some folks who were speaking Irish and watching a soccer match on the TV. It felt like I was in a movie.

We had to scarf our food down because we had a Gravedigger Ghost Bus Tour to go to. My brother did not want to do this tour. He is not big on scary things and he didn’t think it was going to be that good. I insisted we do something outside the norm. Well, guess what. He enjoyed it thoroughly.

The actors on the bus were so funny and they kept the momentum going talking about Irish history, the famine, the bubonic plague and so many other things. We really got a great history lesson on this tour.

The bus is Ireland’s only 4D double decker bus ride. So, throughout the journey, you would hair chains clanking on the bus and other spooky sounds. The bus was also blacked out, so you couldn’t see outside.

The actors pretended were dressed like victims of the plague and believe me, they put their hearts and soul into the performances. They told tales of the plague that left me in absolute disbelief. Ireland’s history is scary.

For me, the tour started slowly and was a bit boring at first, but the main actor quickly picked up the pace and it became very interesting. I jumped a couple of times, but it wasn’t scary. It was more of a history lesson.

Our tour also stopped off at the Glasnevin cemetery, which is absolutely beautiful. I know I sound like a weirdo, but it really is a beautiful and peaceful place. From there, we went to the Gravedigger pub next door and later returned to our pick-up location. We had a good time and a drink.

One of the things I have to say about Dublin is, we literally went through four seasons in one day. I see why people say bring your umbrellas and rain boots. One minute it was super sunny and the temperature was cool and comfortable. Hours later, it was cold, rainy and windy.

Because of this, we decided to cancel a bike ride that we had planned. I was so looking forward to it, but I didn’t think we would enjoy it given the weather.

The Cliffs Of Moher

If you’ve ever watched The Princess Bride (I must have watched in 2 million times), you would be quite familiar with the Cliffs of Moher. In the movie, it’s referred to as the “Cliffs of Insanity.” And it is quite insane.

These jagged edged cliffs are really a sight to behold. Simply spectacular. They are located in County Clare, 702 feet above the Atlantic Ocean. They are also very dangerous. A man just fell to his death this week. You know we’re black AND Bahamian. So, we stayed far away.

I told my brother that we would climb up the cliffs, but we wouldn’t go up too high because there was no guard railing to protect us. Plus, it was rainy, cold and very blustery that day.

I had promised that I was going to take my flag up there, but forgot it in the tour bus. We had to go all the way back to the bottom to get our flag, but it was so worth it.

I would highly recommend the majestic Cliffs of Moher. Make sure to take your rain boots and a jacket. You won’t regret it.

Ok, so here’s what you need to know about me. I love to read. Like . . . I really love books. So, no matter where I go, I always find myself in a bookstore. One such place was The Winding Stair in Dublin.

I got a few notebooks (because I’m forever making notes and writing lists), as well as some books on climate change.

This was an independent bookstore, which I loved. This place, which is located near the Ha’Penny Bridge, is so adorable. It was very well appointed and the store’s attendant was so helpful.

There’s so much to talk about that I have to separate them into different blog posts. So, stay tuned for more.

2 Replies to “My First Trip To Dublin, Ireland”