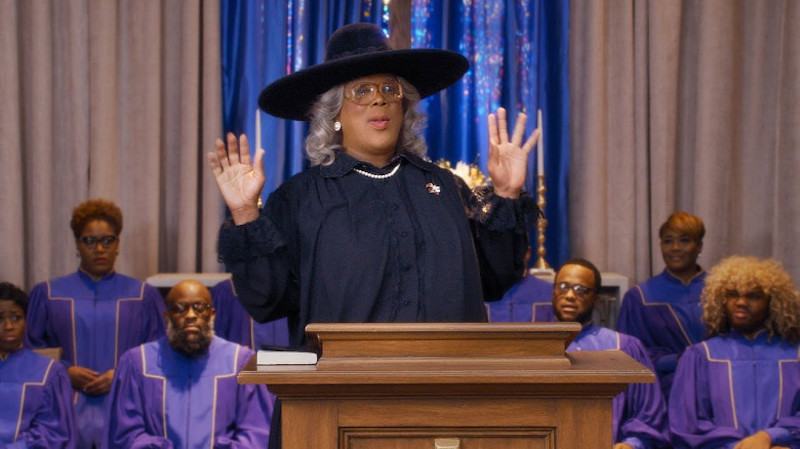 Tyler Perry’s A Madea Family Funeral – Save Your Money

That being said, over the past years I have watched Tyler produce a string of subpar movies that have really been a hit or miss at the box office. I also feel like he has dumbed down his art for the sake of laughs. His writing, meantime, has gotten lazy, rushed, sloppy and predictable.

I will never forget the first movie I watched from this entertainment juggernaut – it was Tyler Perry’s Diary of A Mad Black Woman. I was in college in Atlanta and went with my friends to see this film no fewer than five times. I loved it that much, particularly the franchise’s matriarch Madea.

Her homespun wisdom coupled with her ability to set it off while butchering the English language remind me of so many people I have met along the way. I find her comforting.

So, hearing Tyler announce that his latest film, A Madea Family Funeral would be Madea’s aka Mabel Simmons last hurrah brought with it a bit of sadness and anticipation. I just knew she would go out with a bang. Sadly, I was mistaken.

The movie follows Madea and the Scooby Doo gang (Uncle Joe, Hattie, Aunt Bam and Brian) as they head out of town for an anniversary celebration at a relative’s house.

However, things quickly turn sour when a family member dies under lascivious circumstances. The plot quickly unravels, emotions run high and culminates with an over-the-top funeral. There are some deep dark family secrets along the way.

When I go to most of Tyler’s films, I go to laugh. But, this film’s opening felt amateurish and cheap. I sat in a theatre full of people and no one laughed for the first 20 minutes. (Side note: This was the first time in a long time that I couldn’t find someone to watch a movie with. The minute my friends and family heard that I wanted to watch Madea, they declined. They just didn’t think it would be funny. My niece and her boyfriend ended up tagging along).

Tyler has a tendency to tell the audience what is going on rather than allowing them to figure it out along the way. He’s incredibly heavy on dialogue and at times, it seems like he and his cast are rambling off script, throwing jokes against the wall hoping they stick.

He often weaves social issues into his script. There’s a scene where Brian is stopped by the police and quickly coaches the gang on the proper way to behave when dealing with the authorities. The scene was so preachy, over-the-top and unnecessary that I found myself pleading internally for it to end. It was just too much.

We find ourselves meeting new characters, one of whom is the wheelchair-bound, Heathrow, who has not only lost both of his legs, but requires an artificial voice box to speak. This character is so buffoonish and unnecessary that I don’t know why Tyler thought he’d be a funny addition.

As the movie moves along, we learn that there’s a whole lot of cheating going on.

One character that I truly enjoyed watching on screen was actor Courtney Burrell. He nails his performance as the rough-around-the-edges, AJ, who just can’t seem to keep his temper in check and his hands off of his brother’s girlfriend. He truly was a bright spot in this film and was one of the few people who didn’t seem as if he was acting. He was very natural. I loved how much I hated him.

I think my favorite scene may have been the church scene on the day of the funeral. Yes, it’s over-the-top as hell, but as someone who has sat through my fair share of longwinded black funerals, I could totally relate to some of the goings on.

I was happy to see Tyler incorporate so many YouTube stars in the film, like Joanne the Scammer. I love that he gives young creatives a chance to shine on the big screen.

Anyway, the film climaxes with the revelation of more family secrets and towards the end one of them ends up running off with Mike Tyson. If it seems like I’m missing some key points, I’m not. That’s literally how the movie went.

Is This The End For Madea? Say It Ain’t So.

I sincerely hope this is not Madea’s final curtain, as it would be literally the worst movie sendoff in cinematic history.

After the movie ended, my niece quickly noted that it wasn’t Tyler’s best. I have to say, I agree.

All in all, I rate it two stars out of five. I would only watch this movie again if they put the funeral portion on film and that’s it.

This goes down as one of Tyler’s worst films, along with A Madea Christmas and Madea’s Witness Protection.