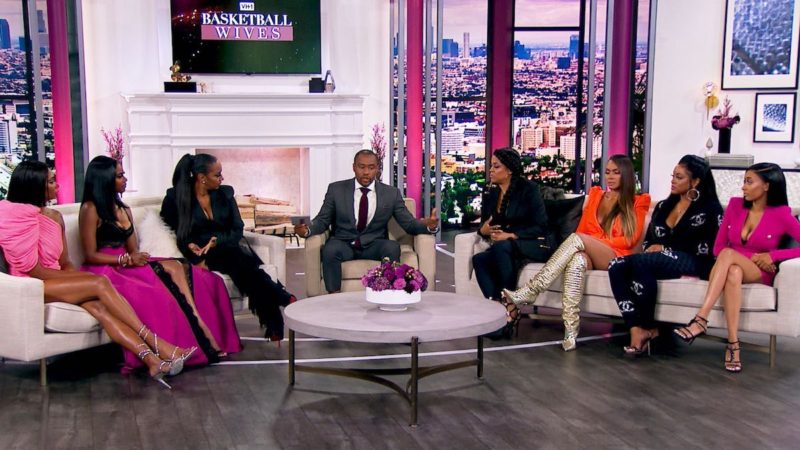 Retired footballer and frequent verbal ass whopper, Ogom “OG” Chijundu pulled no punches on VH1s Basketball Wives Wednesday night, as she claimed that her arch nemesis, Evelyn Lozada is a “known slut in the industry who makes money on her back or on her knees.” Damn!

The fiery exchange took place after resident bully, Evelyn taunted OG calling her broke. It was the latest spat to take place between the two women, who have locked horns all season.

The spat took place during the second part of the reunion. OG went all in after being jettisoned to a private stage due to her alleged “aggressiveness.” But, Evelyn, who has jumped on tables and thrown bottles, Malyasia Pargo, who has lifted up entire tables to throw at people during fights and Jackie Christie who stays in people’s faces were allowed on the stage. Hypocrite much?

Anyway, OG once again brought up the fact that Evelyn Lozada’s ex husband, Chad Ochocinco was sliding into her DMs and being flirtatious. She brought out all the receipts and I was not ready.

Meantime, OG’s boyfriend, Kwame Alexander sat next to her in support and warned the ladies to “keep my name out y’all mouth.”

Evelyn, who was obviously bothered by OG’s claims, pretended like she didn’t care that Chad had reached out to OG. She later called OG broke and quickly followed that up to remind her nemesis that, “I make money.”

OG immediately fired back: “On your back or on your knees sometimes, it depends.”

Evelyn kept smiling, but you could tell she was deeply hurt. She has been taking losses all season. At this rate, her team is gonna have to trade her.

I didn’t feel sorry for Evelyn one bit. This show is eight seasons in. Evelyn has been disgusting and destructive to almost every single cast member who has ever passed through Basketball Wives. This is the first time that she has met her match.

By now you should know that OG is, was, and will always be my favourite cast member of Basketball Wives Season 8. I love her fearlessness and willingness to take on the bullies of Basketball Wives, more specifically Evelyn and the show’s executive producer, Shaunie O’Neal.

OG maintained that she is not aggressive, although she does threaten the ladies who come for her frequently. But, who could blame her? She is often in a room with combative ladies.

Feby Is Not Needed Next Season

I really don’t know why Feby Torres is a cast member. She has no storyline, she’s weak as hell, she barks whenever her bestie, Evelyn is around, but one-on-one, she cracks.

She loves to throw rocks and hide her hands, and she has an unusual penchant for insulting Jackie Christie, a woman who is old enough to be her mother.

Hopefully, she won’t return next season.

At the end of tonight’s show, Shaunie, who as I mentioned is one of the show’s executive producers, was forced to address OG’s claims of colorism on the show.

OG was upset that Evelyn, who, in the wake of this controversy now claims to be Afro-Latina, was getting away with using the ‘n-word’ and had posted a picture of a monkey on her social media page that OG believed was a dig at her. I do, too. Evelyn is very intentional in what she does and that was no accident.

I have always had a problem with non-blacks using the ‘n-word.’ Yet, black people give many of them a pass, for what reason, I don’t know.

Evelyn has referred to black women as cockroaches in the past, too. She has been most disrespectful. Last night, she said that she discovered that she is 25 percent African. Ok, boo.

Anyway, Shaunie said she was sorry that OG had that experience on the show and said she was excited to have a Nigerian girl on the cast. She noted that colorism is a real problem and said that is not what the show stands for.

Something tells me that had VH1 and other sponsors not pressured Shaunie into making a statement, she would not have.

I’m glad it’s all over, but I am sorry that I won’t see OG anymore. She was a big draw this season. I’m also going to miss Tami Roman, who didn’t attend tonight’s taping. She has also made it known that her time on the show is done.

Shaunie intimated that many people won’t be back. Hmmn, I wonder just who that could be. These ladies are so petty and transparent.